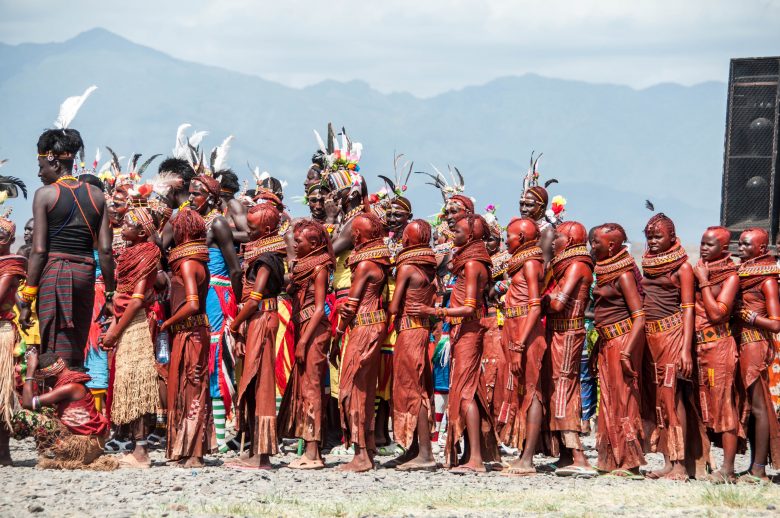 What happens when you mix breath-taking scenery, people with a culture that remains largely unchanged and a landscape that houses the heritage of mankind in the form of bones and tools that are millions of years old?

This final article in the series of articles on Lake Turkana and its surroundings, documents some of the efforts made to showcase and preserve the rich heritage and culture that is found in the north of Kenya.

Lake Turkana’s beautiful green waters give the lake its nickname, the ‘Jade Sea’. The landscape within and surrounding this lake, the largest desert lake in the world, has been described as extra-terrestrial. A tourist visiting the area in December 2016 made the following impressive video:

Everyone cannot afford to fly to the north of Kenya to visit this spectacular place. In 2014, a local tourist, Wangechi Gitahi, on a shoe-string budget, blogged about her journey to Lake Turkana by public transport and hitch-hiking on the back of a lorry.

As Wangechi writes, a lorry-ride is not the most reliable way to get to the lake, however, she was so enthralled on her first visit to this part of the country, she had to return in 2016, this time blogging about the culture of the people with beautiful pictures which can be found here.

In another post, I wrote about an area to the east of Lake Turkana, called Koobi Foora, where hominid bones (hominids preceded humans) that lay in this landscape, some for than more than a million years, have been found. Koobi Foora is within one of the Lake Turkana National Parks.

In 1997, UNESCO designated  the Lake Turkana National Parks a site of Outstanding Universal Value. Being on the World Heritage list comes with a set of obligations and UNESCO has been keeping tabs on the projects that could and do have an impact on this area.

In the  40th session of the UNESCO World Heritage Committee meeting held  in Turkey in 2016, a report on the status of the Lake Turkana National Parks was a litany of regrets and requests by the committee to the Kenyan and Ethiopian governments, urging them to work towards maintaining this area as an area of Outstanding Universal Value. (Please see my posts on the Gibe III dam and the Lake Turkana Wind Power project (a wind farm that is located close to Lake Turkana) which are mentioned in this report).

One can read the series of documents between UNESCO and the Kenya and Ethiopia governments that culminated in the cautionary 2016 decision by the committee here.

The joint Ethiopian and Kenyan governments submitted a report in early 2017 to UNESCO, responding to these concerns and documenting the progress they are making in securing this area of Outstanding Universal Value.

Preserving the heritage while developing their respective countries will always be a balancing act for the Kenyan and Ethiopian governments.

The Turkana Basin Institute (TBI), with the permission of the Government of Kenya and through the National Museums of Kenya, serves as the repository for the archaeological and paleontological heritage of the Lake Turkana region.

In 2015, TBI published a book on its history, current status and future endeavors which can be found here.  From it, we learn that TBI is based at two field camp sites which have been built with funds from very generous private donors.

Here is a reminder of Paul Simon with the Ladysmith Black Mambazo, in a 2012 video, singing ‘diamonds on the soles of her shoes’:

TBI sees the long term financing of their projects through fees for field schools, researcher charges for use of the facilities and potentially, via the endowment of a scientific research program.

Students attending the American university, Stony Brooks University, can pay to attend an 11 week study abroad field school at TBI and receive credits through their university. By 2015, 122 students had attended the field schools at TBI.

The field school website says that a scholarship exists for students who live in an African country to attend the field school on a non-credit basis but would instead earn a certificate of completion issued by TBI.

The local government and communities’ effort

The Marsabit county government and the local communities, with help from sponsors, come together to run the Marsabit-Lake Turkana Cultural Festival. This annual festival is intended to promote the culture and heritage of the diverse communities that call Marsabit county their home.

The festival includes activities like traditional dances, boat races and exhibitions by local communities. The festival is not only an attraction for tourists but is also geared to enhance social cohesion among the different communities in Marsabit county.

In the video below from the 2016 festival, under the sky and with catchy traditional music belted out from the loudspeakers, statuesque men and women showed off intriguing and colourful traditional attire.

Here is your opportunity

It is hoped that the series of posts on Lake Turkana and its surroundings will trigger a yearning to explore, preserve and enjoy this part of the north of Kenya.